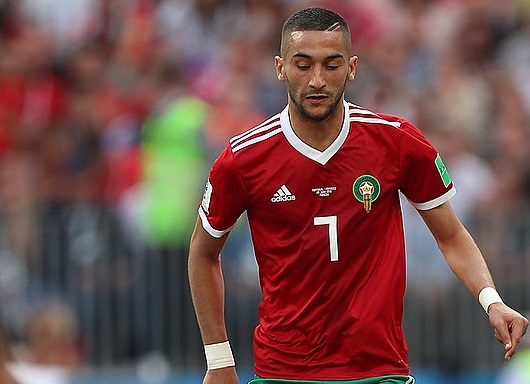 Chelsea have a verbal agreement in place with Ajax for Hakim Ziyech and the deal is expected to be wrapped up before the summer. The move would cost Chelsea reportedly £38 million, according to Dutch newspaper  De Telegraaf.

The London Blues saw their transfer ban cut-short but didn’t sign any player in the January window. Frank Lampard reportedly wanted to sign a striker as cover for Tammy Abraham. With PSG refusing to sell Cavani, Chelsea opted against signing any player in January.

Chelsea immediately started to look for targets in other positions to bolster their squad for the summer. The first player who would most likely be heading to Stamford Bridge in summer is Hakim Ziyech.

The winger has scored 6 times and grabbed 12 assists in just 18 games for Ajax so far in the Eredivisie this season. Ajax sporting director Marc Overmars had earlier confirmed they would eventually allow the 26 year old to leave.

He leaves when a top club comes. He is in focus because of his achievements in the Champions League. Many big clubs are buzzing around him. We promised Hakim [that we would] agree to a good transfer.”

Frank Lampard has recently said his side are the underdogs in the race for the fourth spot after Manchester United signed Bruno Fernandes. It was a clear indication that he wanted more signings in the summer.

Tammy Abraham seemed to confirm on social media the deal for Ziyech could be close.  The Chelsea striker liked a photo on Instagram with the caption: “Ajax and Chelsea have reached an agreement for the transfer of @hziyech this summer.”