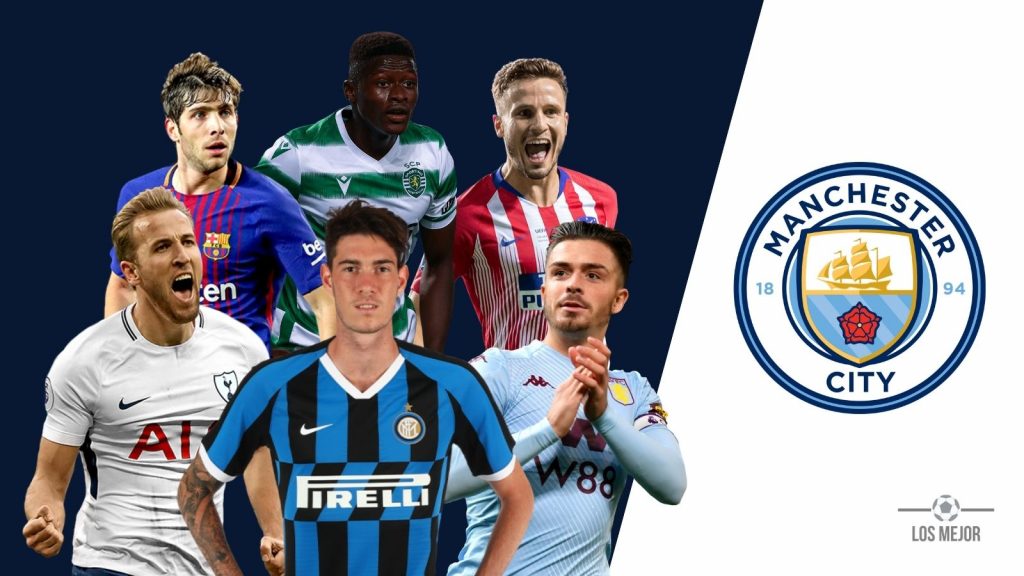 English Champions Man City are planning for a revamp to replace unsettled stars and club legend Sergio Aguero. Filling Aguero’s boots would be no easy task for any one who comes to the Etihad stadium. The Argentine has left City as the club’s all-time record goal scorer and the club’s most decorated player.

Man City have identified England’s prolific captain Harry Kane as their number 1 target but should Spurs not sell their star striker, City have will turn to their 3 men shortlist which includes Haaland and Andre Silva. With Kane making it clear that he wants a new challenge, it is a little known secret that his preferred destination is Man City. City will test the resolve of Spurs with a bid in the upcoming weeks.

Football pundit Duncan Castles claims Bernardo Silva wants a new challenge and has made the City hierarchy aware of his wishes. He adds that Atletico Madrid are willing to swap Saul Niguez for the Portuguese International. The Spanish Champions have made Bernardo Silva their number 1 target but Man City won’t accept a straight swap.

City value Silva at €100 million and the 26 year old has 4 years left on his current City contract. The City player has no intention of forcing a move away from the Etihad Stadium, LosMejor has learnt. Any swap deal would see Atletico pay Man City a lumpsum figure in addition to bolstering Man City with Saul Niguez.

City will try to replace Bernardo Silva with Jack Grealish. The English star is highly rated by Pep Guardiola. Aston Villa’s record signing of Buendia for £35 million from Norwich is an indicator that they might be preparing for life without their captain. Grealish is valued at €100 million by Aston Villa and any City move for the Villa captain would hinge on where Bernardo Silva’s future lies.

Another reportedly unsettled star at the Etihad stadium is believed to be Aymeric Laporte who also has 4 years on his current City contract and City are under absolutely no pressure to sell. Laporte has played in lesser important fixtures after Stones formed a formidable partnership with new signing Dias who was recently praised by Jose Mourinho as the best defender in the world.

Laporte’s contract puts City in control of the situation although Pep Guardiola doesn’t want unhappy players in the squad. City are planning to listen to interesting offers and have slapped a €85 million price tag on the defender.

Both Spanish giants Real Madrid and Barcelona want the Man City defender. While Real Madrid have the funds to pay the amount Man City would ideally demand, Barcelona are hoping to use their contacts at City and offer Sergi Roberto as make-weight to reduce the asking-price.

Barcelona have enquired about Laporte but this remains a complicated transfer to complete. City demand €50m with Sergi Roberto as part of the deal – €20 million more than what Barca are willing to offer. Inter Milan’s Alessandro Bastoni is a player Pep views as an ideal replacement for Laporte should he leave. The defender signed a new contract recently and Inter won’t part easily with the player whom they value at €60m (excluding bonuses).

Pep Guardiola may ask Laporte to stay for a season and fight for a starting spot as there are not too many in the market who can replace one of the best left footed centre-backs in the World. Barcelona recently held meetings with the agents of Gundogan and Mahrez. While Mahrez has decided to stay at Man City, Gundogan’s future is unclear at this moment. He enjoyed his best season at City in the last campaign and City won’t let him leave on the cheap.

Juventus are keeping tabs on Gabriel Jesus’ situation at Man City. Pep Guardiola’s plan for the player is unclear at this point but it will be surprise if City let another striker leave just after Aguero’s exit. City’s youth academy product Liam Delap is expected to be involved more heavily with the first team next season. Pep Guardiola has tried Ferran Torres as striker in the previous campaign and if Harry Kane is signed by City, then there is a glimmer of hope for Juventus in their pursuit of Jesus.

Man City want to offload injury-prone Benjamin Mendy. City have a two men shortlist of Sporting’s Nuno Mendes and Fulham’s Antonee Robinson for the left-back position. While Nuno Mendes is the priority target, the transfer fee may make the deal impossible if City break the bank for both Grealish and Kane. Fulham’s Robinson would come for a cheaper price of around €10m.

This is expected to be a very busy summer window at the Etihad stadium. Meanwhile, City are negotiating a contract extension with the club captain Fernandinho. Man City have offered their captain a 1 year contract extension and they have asked him to be part of Pep Guardiola’s backroom staff when that contract expires. Fernandinho prefers a contract-extension of 2 years but it is only a matter of time before both parties agree on a new deal.